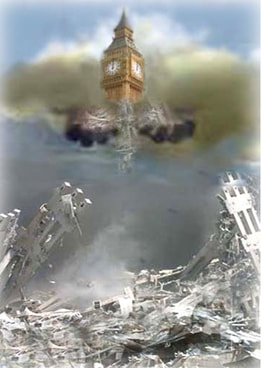 The journey for the "Watch of the Lord" begins:
Though physicians by trade, God had convicted us of our prayerlessness in 1992 when our youngest son was born.  Through this conviction we committed to pursue our personal and corporate lives in prayer.  A life-changing journey began.  We stepped forward in our church and, through contacts in the prayer movement, began to build personal and corporate prayer expressions. In 1998, we were called by national leadership to convene a "Call to Prayer" for California due to prophetic concerns towards our state.    During the gathering, Chuck Pierce released a catalytic prophetic word calling forth the "Watch" for California into eight hubs.  The word released the Holy Spirit powerfully amongst the attendees.  The call to "watch" was indelibly imprinted on our hearts.  As a result, the call towards what the "Watch of the Lord" means became a quest and journey in our hearts and lives.  We have held a form of the "watch" in our region in California ever since.  It has taken on various forms, each with their own lessons and rewards, but all journeying towards the revelation of what the "watch" is  and  the role of Watchmen in the nations  today.

Prophetic breakthrough, open vision October 2000. ~ Athaliah at the Gates!
Immediate interpretation:
​            In a time of intense prayer over particularly vicious warfare I was under, I had a vision, an open vision.  The image completely took over my field of view as if I was there.   I was set on the streets of New York and saw two giant towers explode into rubble.  The debris comprised of steel frames like a building that had collapsed. All of a sudden, a giant pair of hands came out of the sky scooping up the rubble and forming it. The hands opened.  In them was a large clock tower. The clock tower was the image of Big Ben.
This vision was particularly alarming for two reasons. First of all, it was very clear. Secondly, there was a clear paradigm shift in the atmosphere as the warfare broke, and the peace of God settled in.
​
Immediate Interpretation:
In seeking the Lord for the understanding, I heard the words "Athaliah at the gates."  Athaliah means "afflicted of the Lord."   A revelation began to fall regarding this nation (America) and why it continues to hang in the balance. What is possessing our nation's gates that prevents the Lord's purposes from coming forth? The Lord began to show me that the rubble I saw was the destruction Athaliah had caused. Athaliah killed the children of inheritance and usurped the throne from the rightful heirs.  Her rule, however, collapsed as those who carried and understood covenant, the watchmen,  stood watch over the promised inheritance.
The vision was astonishing as the unmistakable peace of God profoundly shifted the atmosphere. 10 months later when 9/11/2001 happened, I was riveted, as was my husband, Fred, to the unfolding scenes of the attacks on NYC, Pennsylvania, and Washington DC. The vision had been a mirror image of the collapsed towers of the World Trade Center after the attacks. We knew the Lord had shown us something very significant. The event riveted our attention in more ways than one. 9/11/2001 was a history-changing cataclysmic event, a definite end-time birth pang when the face of Islam was exposed for all to see. The world would never be the same again.
Furthermore, 9/11 had significant meaning in our family, on both sides. Watching the events unfold, we were catapulted into a battle for our hearts and minds that shattered our paradigm of thinking.  When 9/11 happened, knowing the impact of the open vision just ten months earlier, we ran into the throne room desperately seeking God's directives. We knew something had just happened that had both a national and global impact, and God was drawing our attention to it.
(About Athaliah: See 2 Kings 11:1-21, 2 Chronicles 22:2 through 24:7)
The Haftarah portions read in synagogues around the world that day were Isaiah 61:10-63:9.  This includes the call for the watchmen Is 62:4-7.  The Torah portions were Deut 29:9-30:20 and God's covenant with Israel on the plains of Moab before they went into the promised land.  These Scriptures prophesied into the atmosphere God's redemptive plans and purposes for the church through the devastation.

Present and future Interpretation:
The application and interpretation now extends to the nations as the vision of 09/11/2001 was an event that impacted the world.  The event was a major door of terrorism that governments have been fighting ever since.  Big Ben is an icon of global time.   Through the  2 Kings 11 passage, and after 9/11, God was now speaking even more clearly how the “watch” overthrew the reign of evil and opened the pathway for the true King, Joash, to reign.  Similarly, God is now calling for watchmen to take their place in the nations as He prepares the world for the "Return of the King."  The attack on the World Trade Center was not just about America, but about a significant gate of attack impacting the nations of the world. It was a turning point in world history heralding an awakening sound to the Bride to "Prepare the way."
After 9/11/2001, sensing its import, the draw to the "Watch" eventually became so intense, I (Susan) had to drop my fishing net, a busy and productive ophthalmology practice, and follow Jesus. In men’s eyes, it was a crazy thing to do. In the stillness of the night seasons, however, I knew the peace of God. Many of the lessons God taught us in the hidden places, were valuable seeds for the times today.
​
March 2006:  A hallmark message from the Lord
In March of 2006, we facilitated a powerful Presence-filled conference marked by many miraculous healings.  It was one of a number we had facilitated over the years.  The Presence of God was palpable.  After people left, we went back to our home, His Presence was overwhelming.  It was hard to say anything.  Suddenly, we heard a knock on the door.  We went to the door only to meet the stillness of the night.  No one was there, not even down the street.  Suddenly, we both heard the Lord say, "There is no vessel that can contain My glory."  The Lord immediately convicted our hearts with the revelation of the importance of relationships in the prayer movement and Body of Christ. Assignments and meetings had all been glorious and had their purpose, but now, He was calling us back to the foundations of the great commandments of loving God and loving one another Matthew 22:37-40.  Such foundations of relationships not only fostered agreement but built trust and ongoing fellowship.
Community, commitment to prayer, communication were vital components of the Upper Room in Acts 2:1, 46-47.  These were essential characteristics of other outpourings in history, from Bangor, Ireland in the 500’s A.D.; to the Knights of Saint John Watch in early 1000 A.D.; to Herrnhut, Germany in the 1700's.  Such components led to a habitation of the Holy Spirit igniting world changing corporate prayer expressions and transformation.
The encounter changed our lives, our focus, and our calling.  Interestingly, in the years of walking out the assignment of building through relationships, we uncovered significant generational ties to Herrnhut, Germany.  Herrnhut means "The Lord's Watch."  It all happened so supernaturally; we knew it was God’s final confirming sign and intent towards this call towards a "Global Watch."  Isaiah 58:12 has become a significant driving force for the watches now being established, “Those from among you shall build the old waste places: You shall raise up the foundations of many generations.”
Interestingly, the same year, 2006,  construction began in Mecca of a replica of "Big Ben" that stands over the Ka'aba, the most holy site of Islam.   Its construct looks much like the open vision and again points to the end-time narrative.
​                  The USA and Global Watch and the various watches now emerging in the nations carry an end-time call to train and equip people in the biblical role of a watchmen particularly as it relates to the end-time narrative.  We have "journey" discipleship sessions weekly focused on equipping people in this emerging role and function of the watchman today.
November 2014-Signs in the Sky:
After a meeting of prayer leaders from across the state of CA in Bakersfield and agreement was established to re-birth the vision for a California Prayer Watch, we went out on a Sunday morning prayer drive and encountered a pillar of fire (see below).  There was nothing feeding it, and it stood still and burned steadily.   As we watched and prayed, it was evident that this was not something to take lightly.  As we pulled away in the car, the flame began to move and traveled east.  We watched it for a full half hour as it continued to move across the city to the East.  In retrospect, it was a sign that God was about to move the vision for the Watch forward into the nations. 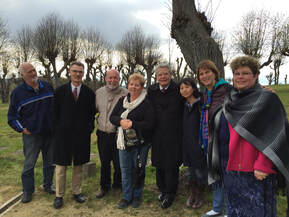 April 27, 2016 amazing meeting with President of Germany
The call to the Watch led us on a preliminary journey to the historic place for watchmen, "Herrnhut, Germany," in April, 2016.  The purpose of the journey was to scout out the possibility of holding a prayer summit on the 290 year anniversary of the historic outpouring, August 27, 2017.   Traveling the back roads of former eastern Germany, we finally landed in the quiet streets of Herrnhut, in the late afternoon, April 27, 2016.  As we stepped out of the car, we were greeted by our host.  Looking down the street, however, a rather diplomatic group of people were walking our direction.  Our host greeted us and stated, "That is the president of Germany, Joachin Gauch!"  Our curiosity was most assuredly peaked.  We followed the core of distinguished people up to "God's Acre,"  the graveyard for the Moravian church and history-making leaders and missionaries.  Staying a respectful distance away, we simply waited pondering this amazing chance meeting.  At some point, one of the entourage approached us and invited us to meet the president.  Of course we gratefully accepted!  This encounter led to meeting the president of Germany who welcomed us into Germany, right at the tombstone of Count Nicholas von Zinzendorf!  ​
Link to the Global Watch We are thankful the Lord had taken His time to teach us the warfare in the trenches. The construct of the Global Watch is entirely different today than it would have been in 2001.  Though this summary just scratches the surface, we pray it inspires your hearts to respond to the call of God. “Run with the vision. It shall tarry no more.” (Habakkuk 2:1-3). Jesus urged His disciples to watch (ex. Mark 13:3-35) What does that mean? Build up relationships around you, commit to pray, build community, communicate, and share with one another, connect across the nations, and watch God move. The time is now. The Body is becoming the Bride, awakened, ready and alert! The true King is coming.  No person is too small or ministry too big to participate.  Participation does not interfere with any person's individual call, ministry, or church leadership structure, but functions to guard and protect one another.  The watch will prepare the way for His rule and reign!
On the ramparts Watching
Sue and Fred Rowe