By Decree of the Watchers

By Decree of the Watchers

​‘This decision is by the decree of the watchers,
And the sentence by the word of the holy ones,
In order that the living may know
That the Most High rules in the kingdom of men,
Gives it to whomever He will,
And sets over it the lowest of men.’
Daniel 4:17 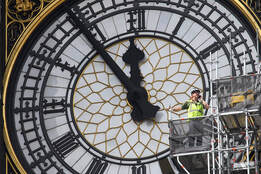 July 2018
Unlike revelatory momentary visions, the vision below appeared over a five day period.  Progressing over the course of days, the vision speaks of covenantal plans of God between nations and Israel.  The stance of nations with Israel is on the line requiring diligence and faith in our prayers as watchmen.

VISION
The vision first appeared over a week as an aerial view with a compass centered over the UK and portions of northern Europe, southern Scandinavia.  The point of the compass was directed towards Israel.  However, the compass wavered to the right and left as if it was teetering.  Europe was dark underneath.  The next day, the same vision appeared, however, now there were two angels standing close together.  They were very large, twice the height of the compass’ width.  One stood with a large archer’s bow and arrow drawn as if ready to shoot.  The other held nothing but was actively engaged in directing the archer.  The archer's bow was drawn with an arrow distinctly pointing to the USA.
The addition of the angels was significant as it was the day it was announced the face of Big Ben was to be restored to original face and colors, July 11, 2018.  Big Ben is an icon of global time.  In asking the Lord who, and what was the significance of the angels, I kept hearing the word “Watchers.”  Their alert stance and the strength of the bow was remarkable.  The day of release and work on Big Ben commencing heralds a global call.
Over the following two days, the vision advanced as additional arrows appeared on the angels back in a quiver, and the positioning changed, as the target shifted.  It was as if they were looking for something.  In seeking the Lord, I heard the word “Faith.”  The angels were looking for the faith in which they could release the arrows with targeted accuracy.
FAITH would release the arrows and stabilize the compass.
In reviewing the word “Bow” in scripture, the first mention of it is in Genesis 9:13.  In Hebrew, it is the word, קֶשֶׁת qešeṯ.  It is the word also for “Rainbow” mentioned in Genesis 9:13.  The rainbow is a sign of God’s covenant.

VISIONARY CALL AND TIME TO ALIGN:
The stance of the angels was of surety and strength and was in stark contrast to the wavering of the compass. Watchmen are distinctly called throughout scripture to watch over God’s covenant (the bow that shoots the arrow with surety).  Decrees empowered by faith will release the arrows of heaven, the Word of God with powerful accuracy.  Job 22:28 exhorts, “You will also declare a thing and it will be established for you; so light will shine on your ways.”

Now is an hour for the Watchmen to align.  God is releasing a governmental stance to watch over His covenant purposes which include Israel.  A revelation of His Word and timing will release new faith.  In a time when the enemy intends to change the times and the law, the Lord is calling for the covenantal vision and strength of the “Watchmen.”   Faith is critical. Faith in His word is a different stance than casual agreement with Scripture.  This is an hour to declare the Word of God boldly.  Job 22: 29-30 speaks of the reward:

“So light will shine on your ways.  When they cast you down, and you say, ‘Exaltation will come!’
Then He will save the humble person.  He will even deliver one who is not innocent;
Yes, he will be delivered by the purity of your hands.”

When the decrees of His Word are declared, the arrows in heaven will be released, targets hit, and the compass will stabilize.  God’s covenantal promises to nations and to Israel will come into alignment.

WORD OF WARNING: PROMISES OF PURPOSE
Doubt, deception, and discouragement are tools of the enemy to destabilize the plans of God.  Be aware of the tactics of the enemy to undermine your faith and take an active stance against these schemes.  In this time, the enemy wants to draw attention to himself so that God’s timing is missed (Daniel 2:21).  Refuse thoughts that pull you into despair, criticism, and anxiety.  We are in an hour when faith must prevail in our hearts. Faith required now is honed in true humility which holds the Word of God with relentless resolve.  Look at the contrast between faith and doubt:

Doubt:
Faith:
By decreeing and declaring in faith, the resources of heaven are released.  Hebrews 12:1 promises:

"Therefore we also, since we are surrounded by so great a cloud of witnesses, let us lay aside every weight, and the sin which so easily ensnares us, and let us run with endurance the race that is set before us, looking unto Jesus, the author and finisher of our faith, who for the joy that was set before Him endured the cross, despising the shame, and has sat down at the right hand of the throne of God."

May our stance be secured in faith.  Let us not be found lacking, but rather spur one another on as the "Watchmen" connect across the nations.  Jesus exhorts us on the import of faith in Luke 18:8, "Nevertheless, when the Son of Man comes, will He really find faith on the earth?"  Prayers propelled by faith will stabilize the compass, the direction of our lives, our loved ones, and our nations.
One word of caution, though we move into powerful prayers through faith, love must be the final result.  1 Corinthians 13:2 says it best, “And though I have the gift of prophecy, and understand all mysteries and all knowledge, and though I have all faith, so that I could remove mountains, but have not love, I am nothing.”
May faith, hope, and love abound to strengthen you and uphold you in your stance and stabilize the course before you.

On the Wall and Declaring the Release!
​