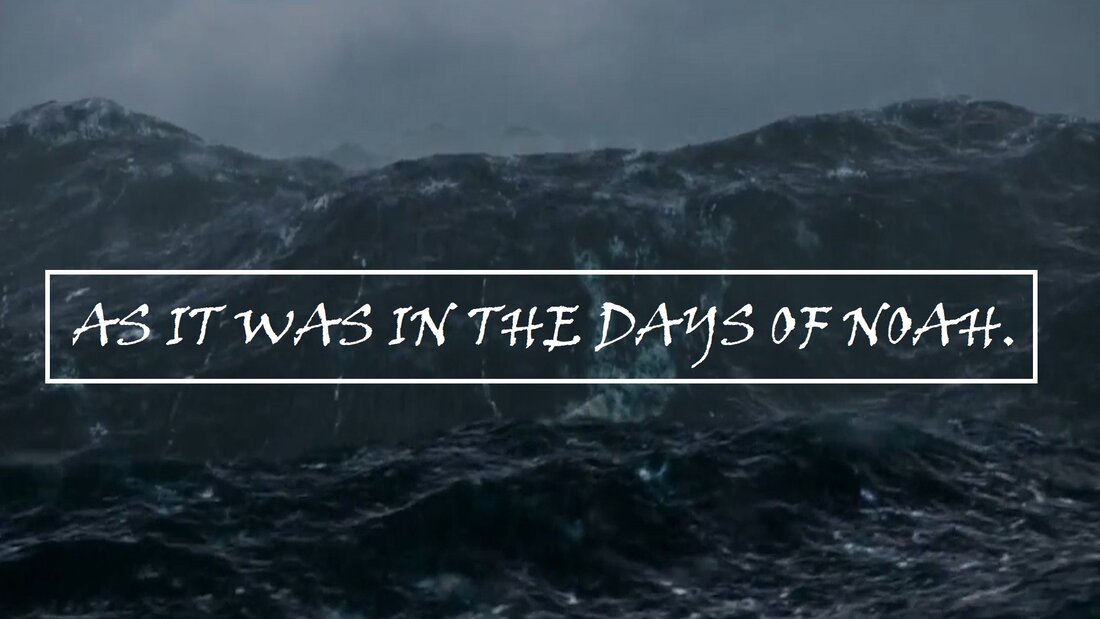 “But as the days of Noah were, so also will the coming of the Son of Man be.  For as in the days before the flood, they were eating and drinking,
marrying and giving in marriage, until the day that Noah entered the ark, and did not know until the flood came and took them all away,
so also will the coming of the Son of Man be.”  Matthew 24:37-39
​ This past week looking over the horizon of the news, everywhere I looked, there was some kind of disrupting challenge…from 8.2 earthquake in Alaska, to floods in Belgium and Germany, to unrelenting fires on the West Coast of America, tornadoes in the Midwest USA, to violence on our streets and COVID 19 delta variant rising, the news was overwhelming.  Amid the turmoil, I have been concerned that too many are unconcerned and going about expecting life as usual.  Equally concerning was a sound of weariness rising in the camp of the warriors and ones building the wall.  People are tired and ready to give up, or just turn over and go back to bed.  In the natural, such fatigue is understandable.  I too wanted to turn off everything to try to discern the voice of the Lord.

While questioning all that was going on, out of the clear blue a voice came saying, “You are in the days of Noah.”  Like a laser it cut through my weariness and leapt to the forefront of my mind.  What does it mean?

In investigating further, I turned to Matthew 24:37-39.  It was a collision of God's Word and His revealed Word:
The words struck my heart with circumcising power!  The end-time narrative we have all been witnessing came into a fresh inspiration to “Not give-up.”  The taunt of weariness fell to the ground as the reality of the times gripped my heart.  Furthermore, we are entering the Hebraic year 5782:  This is a leap year in the Hebraic traditions with two Adar months, Adar 1 and Adar II.  It is also a Shmita year or a year of rest.  Noah's name means "rest."  This fact accentuates the sense of the "Days of Noah."  During a Shmita year, the land is left to lie fallow.  In Hebraic tradition, fruit and vegetables that grow on their own may be picked by anyone.  It is also a time when debts are forgiven.  We are preparing for a new year, a new season, the Hebraic year 5782 is ahead.  As a Shmitah year, God is taking what has been worked in our spiritual soil and readying it to produce more.  What is the Lord saying?

When Noah appeared on the biblical scene, God was so grieved with what had happened to His creation, He wanted to destroy it:  “I will destroy man whom I have created from the face of the earth, both man and beast, creeping thing and birds of the air, for I am sorry that I have made them” (Genesis 6:7).  Amid the chaos, however, Noah found favor and grace in the eyes of the Lord (Genesis 6:8).
​
How did Noah grab God’s attention?  Genesis 6:9 explains:  “Noah walked with God.” Noah walked differently than others.  The word walk in Hebrew is hâlaḵ.  Strong’s describes this word as continually, to be conversant, exercise, follow.  In other words, the distinctives of this walk is that it was intentional.  It does not describe a lazy, meandering walk in the park.  There is purpose and engagement in the walk.  It is the same word used when Adam and Eve, after the fall, “heard the sound of the Lord God walking” (Genesis 3:8).   God was on a purposeful walk towards Adam and Eve.  He knew what had happened but with intentionality was moving towards them to redeem and restore.

Similarly today, in the midst of chaos, God is calling us to “halak” with Him.  The “halak” walk is a walk that carries a weight for change and transition.  Amid the turmoil today, there is a transition taking place that is shifting the course of lives, and even nations into the end-time narrative.  Can you hear the sound of the walk?  What is its nature?

As we enter a Shmita year, a year of rest, how does that impact our walk?  How do we navigate the rhythms of heaven to run the race with endurance?  From Noah's life we can glean an understanding.

The Halak Walk:
Noah’s halak walk with God carried him through 100 years of chaos, opposition, and resistant culture, listening and obeying God through it all.  Despite the chaos, Noah knew the “rest” of God.  He knew the rhythms of rest in order to see the fulfillment of his calling.

Today as birth pangs hit the nations and rattle the frontlines of the news, we are increasingly needing to know how to enter the “rest” of God lest we get tired and weary and fall back into the wings of complacency, and a “busyness” that will eventually dry up our spiritual lives.  This is a year of awakening!  The "rest" of God is preparing the soil we have all tilled and labored for so we can produce more.  New levels of trust with God and one another will prepare us to multiply productivity in the season ahead.  Let us not grow weary.  Rather, let us understand His rest.  It requires us to stay engaged and continually pursue our walk with Him.  The awakening is coming!

May the “Halak” walk be upon you to encourage and strengthen you in days of adversity.
Susan Rowe
​The Global Watch