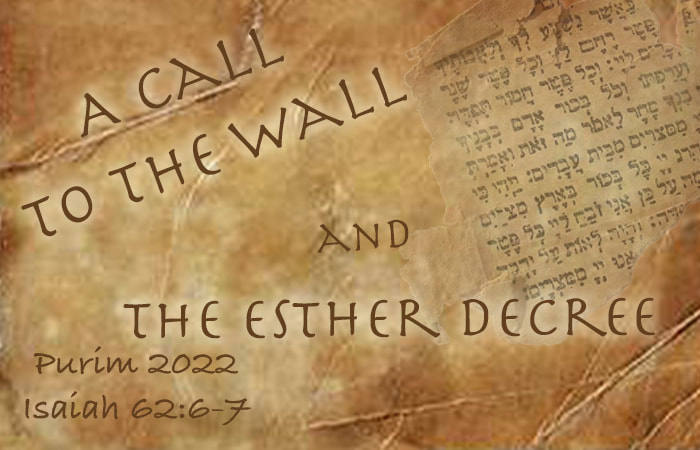 This prayer intervention has been initiated by physicians and ministry leaders, sensing a significant convergence of time for Purim this year.  This sense has been re-affirmed and confirmed through the advent now of the Russian Ukrainian war.  There is general agreement that the war and COVID 19 is evidence of the spiritual battle now raging over the nations.   There are also significant timing issues all converging around the time of Purim.   Purim is highlighted this year as there are 2 months of Adar being a Hebraic leap year.  Adar is the month of the story of Esther.  Like Haman's plan to annihilate Israel, between the war and COVID 19, we see a clarion call for the body of Christ to join together to be like Mordecai in the days of Esther, standing daily at the gates for life and deliverance.
In biblical times of pestilence or plague, God required His people to take an essential spiritual stance to do what is right (Exodus 7-11; Numbers 16, 25; 1 Samuel 6; 2 Samuel 24).  Revelation prophecies seven plagues in the end-times that will be much more devastating than COVID 19.   Like in biblical times, God is using the present war and pandemic to capture our attention to prepare us for the times ahead.  This "Call to the Wall"  is a call to unify under God, repent, repair the breaches, and build up the spiritual walls of prayer across the nations and with Israel/Jerusalem.
Confirmations of timing:  (For more information and history go to Rania Sayegh's call for Esther Call to Prayer and Fasting)
Oh, that You would rend the heavens!
That You would come down!
That the mountains might shake at Your presence--
As fire burns brushwood,
As fire causes water to boil--
To make Your name known to Your adversaries,
That the nations may tremble at Your presence!
When You did awesome things for which we did not look,
You came down,
The mountains shook at Your presence.
For since the beginning of the world
Men have not heard nor perceived by the ear,
Nor has the eye seen any God besides You,
Who acts for the one who waits for Him.
There is also converging agreement towards the call to pray for Iran and its prophetic destiny outlined in Jeremiah 49:36-39
Against Elam I will bring the four winds
From the four quarters of heaven,
And scatter them toward all those winds;
There shall be no nations where the outcasts of Elam will not go.
For I will cause Elam to be dismayed before their enemies
And before those who seek their life.
I will bring disaster upon them,
My fierce anger,' says the LORD;
'And I will send the sword after them
Until I have consumed them.
I will set My throne in Elam,
And will destroy from there the king and the princes,' says the LORD.
Jeremiah 49:36-39
For further explanation, see post  by Rania Sayegh,  House of Prayer and Exploits, Nazareth, Israel:  Esther Call to Prayer and Fasting:

​"I believe we are called to another Esther moment in history to rise as Esthers all over the world and release our verdicts and decrees over the land of Iran for deliverance from the Haman spirit. Will you join the table of the Lord that He has set before our enemies, even as Esther created a banquet and invited the King together with her enemy “Haman?” There the battle was won! Let’s create a table before our enemies and partake of the table of the Lord, the bread and wine, and unite together for a corporate release from Zion and from the nations of the roar of the Lion of the Tribe of Judah!" R. Sayegh
​
SUMMARY (From Persia):  This call is for a fire of purging, passionate love for Jesus Christ for the present times. The fire of God is not a dread for the yielded ones.  Like Esther, it is a privilege to those who are willing to lay down everything, and let the fire burn in the innermost being through Isaiah’s prophecy Arise, shine for your light has come and the glory of the Lord has risen (Isaiah 60:1). The fire of love as a seal over our hearts (Song 8:6) will keep us from temptation and end-time distractions.​