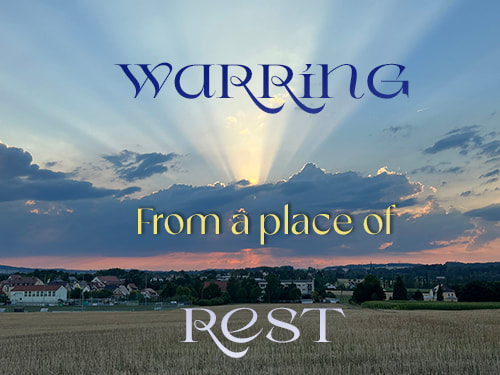 "Warring from a Place of Rest"

There is another kind of rest, and this rest precedes war, initiates war, sustains war, and wins the war. This is not a rest that says we can't go to war. This rest comes from knowing the foe is defeated and must be brought down. It comes from KNOWING we have won before we started fighting.  This is a rest we get into by knowing and believing.

Hebrews 4:3 says, "For we who have believed do enter that rest, as He has said: "So I swore in My wrath, 'They shall not enter My rest,'" although the works were finished from the foundation of the world".

We are called to fight in a battle that had been won. We have a revelation of the end and need to GET STRONG and STAY STRONG in that. Whatever is happening in our world today, and whatever the media is projecting, is not going to change what is written. Daniel 7:18 says, "But the saints of the Most High shall receive the kingdom, and possess the kingdom FOREVER, even FOREVER and EVER.". Ecclesiastes 1:9 says, "That which has been is what will be, That which is done is what will be done...."

Let's continue to take our stand in Him and on His word and keep calling His will to be done on earth as it is in heaven. When we hear or read the news, let us laugh like Him Who sits in heaven (Psalm 2). Let us continually worship the One Who sits on the throne and give up anxiety or fear - whatever the circumstance. Let us stay in His presence, receive His instructions, and do only what He says.

When we war from the place of rest, we don't worry about how many we are. God reduced Gideon's army to 300 men. It is not numbers that win battles.

When we war from the place of rest, we do not worry about what the enemy has that we do not have. David did not need to dress or be armed, like Goliath to defeat him. He beheaded Goliath with Goliath's sword. No king is saved by the multitude of an army and a horse is a vain hope for victory (Psalm 20: 7; 33: 16-17).

When we war from the place of rest we are confident that the enemy will fall. David told Goliath his carcass would be food for the birds of the air. He knew Goliath will never win or escape.  He fought Goliath from a place of victory. So, must we.

When we war from the place of rest, we know the battle is the Lord's and that He will win. This is what made Jehoshaphat go to war with singers leading.

Warring from the place of rest is taking back what belongs to us with the backing of Heaven. In this battle, we know the enemy is a thief and an impostor that has no grounds for victory. This gives us rest in battle.