When the Earth Shook.... 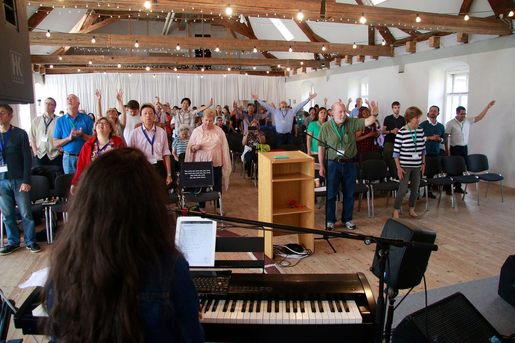 To the Global Watch family:
The Global Watch carries much of the spiritual DNA of Herrnhut Germany.  As such, we are relaying a summary of a significant landmark gathering in Herrnhut, Germany August 11-18th, 2017 on the 290 year anniversary of the outpouring. People from 30+ nations (including villagers) gathered in Herrnhut, Germany to seek the Lord and "Re-dig" the well of revival that took place there, August 13, 1727. The Lord took us to this defining moment surely pointing to a "set time."  The supernatural connections and events that led us to the convening were marked by "Only God could do" confirmations.  The gathering was a distinct call of God, and those in attendance came as a response to that call at significant price and sacrifice.  We are humbled by the numerous stories of God’s obvious hand and provision on how many heard from God and provided supernaturally for their journey.  None came for any recompense, even speakers, and worship leaders.  Most came with a stated desire to “Encounter” God.  It has been our experience that when we ask for such experiences, often the “Encounter” comes in ways we do not expect or understand.  Our sense from the beginning with the lightning strike on God’s acre (confirmed by some of the youth who were there when it happened), to the end, there was a divine message and “Power encounter” with God that ensued and sense of spiritual birth and shift in atmosphere.  Signs followed.
​      Scripturally, the earth shook when Jesus died; the waters parted when Israel was delivered from Egypt, and when the priests stepped into the Jordan to take Israel into the promised land, to name a few.  During creation God said, "Let there be lights in the firmament of the heavens to divide the day from the night; and let them be for signs and seasons, and for days and years."  Suffice it to say, signs can emphasize "set times" of the Lord.  In set times, such as in Abraham's time, the promises of God come true, Genesis 17:21.  They are times when God is emphasizing His purpose and need for focus, perhaps a correction of course (Habakkuk 2:1).  It is not "super spiritualization," but rather an apprehending the times of the Lord, to be noted and to draw our attention to Him, the Lord of Hosts.  Not to underestimate, but rather give focus, the acronym “PRICE" has come to mind describing the experience at “Watchmen Rise and Build” week in Herrnhut.  We experienced the following, each in our distinctive way:
​
P-    Power Encounter with God
R-    Re-setting and re-aligning us with our
I-    Identity in Christ individually and corporately
C-     Commissioning  and
E-    Empowering us forward

In very "Brief" review, a few hours before the meeting in Herrnhut started, the area encountered a lightning and thunder strike that "Shook" the earth.  The testimony of the lightning strike that "Shook the earth" hit "God's Acre" has come through young adults on sight at the Watch tower when it happened.  Many of the residents in Herrnhut and those of us there were suddenly riveted to attention.  Residents of Herrnhut said they have never witnessed anything like it.  That was the beginning of the Lord of Hosts taking command of a meeting that only time will tell of its significance.  Suffice it to say; the "Summit" was at the very least provoking, if not life changing for many of those in attendance.  Why? Because the Lord of Hosts met us.
Getting serious with God, Tuesday evening, August 15th a travail broke out that led many into the wee hours of the morning weeping in surges across the room.  The meeting was closed to allow God to "deal" with each one of us individually as deep repentance took over the convening.  The sense of spiritual birth was real.  This spiritual nature of the travail was confirmed when reports reached us of similar manifestations happening at the same time on a University campus in Egypt and in two prayer groups in California.   That night a massive thunderstorm hit Europe, shutting down many of Europe's airports.

As the wave of the storm broke, Wednesday felt like breakthrough.  An early morning sign of God's covenant appeared over the landscape sending a release of His peace.  The evening worship was powerful marked by sunshine and breakthrough.
VISION:  In the midst of the worship Wednesday evening, the Lord released a vision (Susan Rowe.)  It was of a large palatial platform, interspersed with columns and a marble floor.  Behind me I heard the Lord say, "Where are My runner's?"  Then in a louder voice, "Where are My runner's?" And again in a third time in an even louder voice, "Where are My runner's?"  In the midst of it, I saw a few small runner's come from behind the columns and beginning to run forward.  We proclaimed this over the room.  The following morning, this message was confirmed as Wendi Simas brought forward a word that had just been released in Charisma Magazine, "Apostolic Runner's will bring the Prophetic Full Circle."  It is a powerful word that we all took as a confirmation and exhortation going forward.
Of note, key words going into the gathering included "reconciliation" and "alignment."  There were significant alignments made both individually and corporately as people were apprehended and refreshed in the Presence of the Lord.  Outward manifestations of the results of the alignments and reconciliation proved themselves as testimonies of personal lives and the community of "Herrnhut" itself being impacted.  Delegates from the summit shared with the Moravian church communion service on Saturday night, 13 August.  Moravians stepped across their boundary lines to participate in the prophetic staking of scriptures Wednesday and participated in the prayer/worship night Thursday.  We may stand corrected, but it was relayed to us this was a first time in many years that this had happened in the village.  Messages on transformation, watchmen, and Ekklesia were provoking if not life impacting sending us forward with purpose.
Key concepts and take home messages from Herrnhut: Key Scriptures:
John 12:24 "Most assuredly, I say to you, unless a grain of wheat falls into the ground and dies, it remains alone; but if it dies, it produces much grain."
John 15:1-15
Isaiah 58:12 "Those from among you shall build the old waste places; You shall raise up the foundations of many generations; and you shall be called the Repairer of the Breach, and Restorer of Streets to Dwell in."
Isaiah 54
Psalm 46
Isaiah 9:7
2 Kings 11

INVITE GOING FORWARD:   Whatever your take on the convening, understanding the role and construct of the “Watch” and being “Watchmen” in repairing the breaches, and restorers of the understanding of Ekklesia are powerful transformational concepts.  It was a message that shook the earth, and the heavens declared its impact and import.  Now the commission is to go forward.   It's time to carry the seed of Herrnhut forward into the nations and nurture it to fruition.

​To join the growing family of watchmen across the nations click here.
The newspaper headlines of our local news Sunday, August 20th, 2017 says it all, "When the Earth Shook!" Coincidence?...We don't think so:

​History of Herrnhut by Christopher Ngai and Young Adults, by Drew Clark
PSALM 46
God is our refuge and strength,
A very present help in trouble.
Therefore we will not fear,
Even though the earth be removed,
And though the mountains be carried into the midst of the sea;
Though its waters roar and be troubled,
Though the mountains shake with its swelling.
Selah
There is a river whose streams shall make glad the city of God,
The holy place of the tabernacle of the Most High.
God is in the midst of her, she shall not be moved;
God shall help her, just at the break of dawn.
The nations raged, the kingdoms were moved;
He uttered His voice, the earth melted.
The Lord of hosts is with us;
The God of Jacob is our refuge.
Selah
Come, behold the works of the Lord,
Who has made desolations in the earth.
He makes wars cease to the end of the earth;
He breaks the bow and cuts the spear in two;
He burns the chariot in the fire.
Be still, and know that I am God;
I will be exalted among the nations,
I will be exalted in the earth!
The Lord of hosts is with us;
The God of Jacob is our refuge.