“Then the Lord appointed a set time, saying,
'Tomorrow the Lord will do this thing in the land.'”  Exodus 9:5 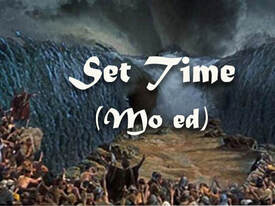 As we gathered from across the nations to "Exalt Jesus" the first 21 days of 2021, there was a distinct sense that we had journeyed into more than 21days but rather had landed in a “Set time” of the Lord.  This sense was affirmed when the last worship set ended on the twenty-first hour of the twenty-first day of the twenty-first year of the twenty-first century.  Such a time convergence raises one’s eyebrows and certainly raises the question of its significance.  As we have been pondering all that God did, we are sharing these thoughts as they have helped us hone the vision into point clarity for the season we have entered.

What is a "Set-time?"
A set-time or mô‘êḏ;  appears in scriptures 223 times.  Three main biblical themes emerge around these "Set times," they define a determined season, it is a place of meeting with the Lord, and they establish God's covenant.   Mô‘êḏ's first mention is when God said, “Let there be lights in the firmament of the heavens to divide the day from the night; and let them be for signs and seasons, and for days and years; and let them be for lights in the firmament of the heavens to give light on the earth,” Gen 1:14-15.  In other words, set times help identify seasons.  Further mention of mô‘êḏ is used to describe the feasts of the Lord, “These are the feasts of the Lord, holy convocations which you shall proclaim at their appointed times. On the fourteenth day of the first month at twilight is the Lord's Passover,” Lev 23:4.  These are God’s appointed times to meet with Him.  In fact the "Tent or tabernacle of meeting," is described as mô‘êḏ, Ex 27:21, 29:4,10,11 etc. Thus, set times are not crafted by men, but rather called by God.  In such times, there is a weight of His intentionality to meet with us.  Lastly, mô‘êḏ is associated with His covenant purposes. Such times are pre-determined for His covenant purposes to be established.  They may bring judgment, as in Egypt, Exodus 9:5, or bring forth deliverance and promise, Gen 17:21.  When Isaac was to appear on the stage of biblical history, God appears to Abram in Genesis 17 a fifth time.  In the encounter, everything around Abram begins to change. God gives both Sarai and Abram a new name, Abraham and Sarah.  When God changed their names, He introduced the fifth letter of the Hebraic alphabet, “Heh”, into both their names.  The fifth letter of the alphabet inserted forever branded their names with “YHVH Elohim.”  Five is also the number for grace.  God announces His intended purpose, “But My covenant I will establish with Isaac, whom Sarah shall bear to you at this set time next year, “ Gen 17:21.  The encounter forever imprinted their lives in the pages of biblical history and set the course for God’s redemptive purposes.
As we navigate the “birthpangs” of these times, it is important to recognize set times.  They carry the weight of God’s plan.  No matter how mô‘êḏ  times look on earth, (usually quite dismaying), when recognized, they will always end up in His redemptive plan.  As Mike Bickle teaches, “The purpose of judgment is to remove obstacles out of the way of God’s love.”  Let’s remember it.  A further look into the significance of 21 and key themes from the 21 days point to the platform God is building and the way forward.

What is the significance of 21?
With the highlight on 21, what does that number represent biblically?  There are a lot of different interpretations you can find online, but these seem most accurate and relevant: In summary, 21 represents a time of increased rebellion and resistance, as well as a time of deliverance.  Today, with sin and rebellion, deception, flying across our headlines in the nations, we are in such a time.  God is preparing us for deliverance.  This is not a time to be disenfranchised but rather to fight.
Interestingly, Isaiah 21 issues the call to the “Watchmen.” Isaiah prophesies of an event not only 200 years in the future, but could even have ramifications today as the nation’s feel the squeeze of the Babylonian economic, political, social systems and natural crises now afoot.  Psalm 2:1 states a clear call “Why do the nations rage?”  Why are they raging?  The rage is pointing to the “set time.”
In America, we could sense the navigation of this mô‘êḏ through the 21 days.  We are in the 400th anniversary of the Pilgrims Landing, 11/11/1620.  The landing is significant for it was propelled by a desire of a small remnant seeking a land where they could live and develop a community based on biblical foundations.  The Mayflower Compact, written on the day they landed, formed the Constitution’s foundation written over 160 years later.  Now, four hundred years later, the very foundations of the Constitution are being contended for by an onslaught of wickedness and deception waging war against this foundation.  Four hundred years is significant scripturally (3): The 2020 elections, no matter how you view them, carried  weight with a sense of a supernatural invasion not only for America but for the nations.  No matter how fervent the prayer, or deep the repentance, the course could not be changed.  No matter our view, in this set time, God will use it all for good eventually.  What is necessary now is to discern this “set time,” seek His plan, and yield to it.

How to navigate this set-time:
Throughout the 21 days the theme and sense of being pressed up to the "Red Sea," repeatedly emerged.  Interestingly, the Torah readings for the 21 days spanned Exodus 1-13.  The chapters covered God's judgments upon Egypt, and preparation for His people for a miraculous delivery.  In a similar fashion today, God is inviting us into His plan for deliverance as the "heat" of battle rises in the nations and the need for His supernatural intervention is increasingly evident.  How then shall we stand?
GOING FORWARD!
The call has been released and the invitation is now being issued to step into this “Set time.”  A shift has occurred.  The “Table is being set,” Isaiah 21:5, and a platform has been laid for Watchmen to land, sharpen our swords, and lock shields, for the purposes of God to prevail in the heavenlies. Through this platform, the call of the nations is being issued.  New relationships and alignments to watch over God's covenant purposes are being fashioned to fight the battle ahead.  Our eyes are firmly fixed on the horizon.  The “Maranatha” call of God is being released.  Come Lord Jesus.