"The Disrupters are Here!"

For He has clothed me with the garments of salvation,
He has covered me with the robe of righteousness,
As a bridegroom decks himself with ornaments,
And as a bride adorns herself with her jewels.
For as the earth brings forth its bud,
As the garden causes the things that are sown in it to spring forth,
So the Lord GOD will cause righteousness and praise to spring forth before all the nations.
Isaiah 61:10-11
(This was part of the Haftarah readings in Jewish synagogues on 09/11/2001.
It is the scripture also today, 09/11/2020)
​A "disrupter" is not a term one would necessarily invite in the Christian-ease language today and is probably toying with your curiosity even now. However, with the tumult of the times, the prophetic revelation and understanding might be well to heed.  On the anniversary of 09/11/2001, a disruption that changed the course of history struck NYC and the Pentagon, what is God now saying in the chaos of these times?  May this word disrupt thoughts or habits that distract our attention and align us with the promises and purposes of God.
Recently, a remnant warrior group in California battled three date changes, the fires, and COVID 19 restrictions to  gather in South Lake Tahoe for a prayer and prophetic summit.  It was a gathering originally intended for last Spring which, like everything else, was dismantled due to COVID-19 restrictions.  We had re-scheduled three times.  Try to rally people around that!  But, against all odds, we finally landed!  It was truly a Gideon’s Army that pressed through the resistance with an unrelenting spirit to meet with God and each other.  It became an experience where God stripped us of all our usual props, even worship team, to meet with Him in a “Bare-boned” expression.  Through the fires and turmoil around us, all presumptions were stripped, and any expectation we held was quickly thrust aside as the “One thing” became pre-eminent…that is to meet with Him.  We sensed the Lord say, “Am I not enough?”  That corrected any presumptions we might have been holding. Our hearts were quickly cleared and set towards engagement and encounter with Him.  We came open handed, experienced breakthrough, and left with arms and hearts filled with hope and promise, the reward of the "Relentless." Trying to put the various visions people had together, we share this summarizing focus as we believe it is a word for this time and season going into the Feasts.

Visions
We gathered at a place known as Zephyr Point.  As we began to worship, the word Zephyr was clarified by one of the participants:
As she spoke, a wind came in over all of us.  As thanksgiving and heartfelt worship progressed…even without a worship leader, Sue Rowe had a vision:
I clearly heard the word "The disrupters are here."  This word and vision was accompanied by a breeze that swept in over the group. Others also sensed the shift.   As any pressure of performance was removed, we could all sense the peace of God settle in and an ease in which to engage one another.  This led to a morning of deep repentance over personal and corporate issues and afternoon of thoughtful discussions.  From these foundations, God moved amongst us with uncommon unity as a prophetic atmosphere was created.  We gathered at Inspiration Point and made declarations across the lake towards California over the seven mountains past sunset into the evening.  Singing “Raise a Hallelujah” in the darkness we made our way by flashlight back to the meeting room for a lively discussion and report on the small group discussions. Two other visions were reported and are significant:
First Vision:
2nd vision;
What does all this mean?  The disrupters are here
As God stripped away all our expectations, and usual things we lean on for worship,  we witnessed a shift in the atmosphere.  We arrived with a haze that got worse the second day.  After worship, repentance, prayer, and proclamations the second day, the smoke and haze we saw coming into and during the gathering completely dissipated.  What does that mean?  We are in a time when God is provoking and releasing the disrupters to disrupt the enemy assignments holding back the Kingdom to create atmospheres for God to work.
God has loosed an angelic army to assist those who are called to disrupt pain, problems, disappointments of the past and turn them now into the promises for the future.  In other words, expect the scrolls of heaven to be released, i.e. divine strategy to turn mourning into dancing, ashes into beauty, pain into praise, hurts into healing.  Interestingly, as the fires burn, it is symbolic of things of the past being burned up.  The ashes that remain become fertilizer for the future.  Redwood seeds require heat to break open their husks to allow them to root and grow into trees.  The resetting of the forests of our state is underway.  As we fight, the seeds planted within us will erupt in new revelation and authority to deal with the set-backs of the enemy.
For a scriptural reference, look to Zechariah 3.  It was a time when Joshua was before the Lord wearing filthy rags and turban.  The enemy was right beside him talking into His ear likely all the word curses we have heard swirling around our minds that send us into doubt, despair, grief, self-pity, anger, bitterness, jealousy.  As we yield into this time of turbulence with determined faith, God will prevail.  He will put a new turban on our heads with fresh new revelation, faith, hope and joy totally disrupting the plans of the enemy.  Through our praise in the midst of difficulty, God is listening.  The time has come for the new garments.  The Angel of the Lord is saying “The Lord rebuke you Satan! The Lord who has chosen Jerusalem rebuke you!  Is this not a brand plucked from the fire?”  In the midst of the fire, Joshua received new garments.  His life became a blessing.  Delivered out of the ashes of whatever beset him, immediately his iniquities were removed, and God commanded new garments to be given him.  The disrupter was born…and God’s eternal plans were saved!

Evidence of the atmospheric change:  From arrival to end of the day.  Note the smoke in the atmosphere cleared by the last day. 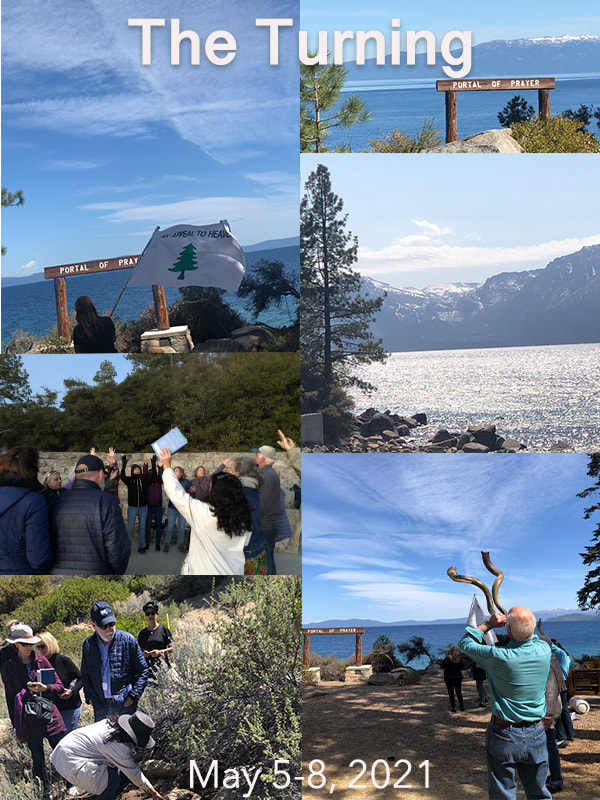