“Be strong and of good courage;
do not be afraid, nor be dismayed for the Lord your God
​is with you wherever you go.” – Joshua 1:9

Summary and Word for the Herrnhut Global Watch Summit 2019 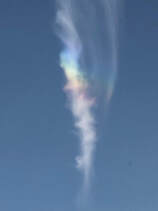 Key scriptures:The 2019 Watchmen Summit, “From Consecration to Courage,” in Herrnhut, Germany, 2-9 August 2019 was marked by representation from 30+ countries.  Throughout the gathering, several themes, the hidden seed, new birth, and dynamic strategies ignited visionary mobilization.  Entwined in these themes was the message from Revelation 4:1, “Come up here for I must show you things to come.”  The description of the throne room and the rainbow around the throne in Revelation 4:3 was confirmed by a rainbow appearing in the sky at the opening Shabbat, Friday night 2 August. We discovered a new way to praise Him, with cameras held to the sky and cheers of joy!
Participants came bearing seeds of His identity, purpose, and spiritual revelation within them.  Some seeds carried the weight of many years of labor, some had been pruned, others were ready to burst forth into new fruit. Still others were hidden, ready and waiting for the right fertilizer to strike for their release and growth.  And, some were buried under a sea of stress and discouragement seeking refreshing and rest.  Where are you in this process?
Throughout the convening the message of the hour was to be “Strong and of good courage,” Joshua 1:9.  There are promises yet to be fulfilled.  We are in a season when seed is being prepared to birth forth into lasting fruit.  It is not a time to be tied up in insecurities, doubt, unbelief and familiar patterns that can easily dismantle us.  Now is the time to cling to the promises, to be in faith for the future. Though the darkness is getting darker, God is bringing forth His light and His glory.  The weaker the vessel, the more powerful the testimony, if we lay hold of Him.  This is the hour of Psalm 84.  "As they pass through the Valley of Baca, (of tears), we will make it a spring," v. 6.   In other words, the trials of the past will bring forth a spring of fresh water filled with the creative force of God to fulfill His every good work.  Setting aside the hindrances, weariness, uncertainties that so easily entangle us, let us lay hold of Christ who set us free.
The message of Psalm 84 sprang forth…literally.  ​
Even Your altars, O Lord of hosts,
My King and my God.
Blessed are those who dwell in Your house;
They will still be praising You.
Blessed is the man whose strength is in You,
Whose heart is set on pilgrimage.
As they pass through the Valley of Baca,
They make it a spring;
The rain also covers it with pools.
They go from strength to strength;
Each one appears before God in Zion.  Psalm 84:3-7

This Psalm being spoken over Herrnhut at the felling of its first tree, was a prominent word throughout the Summit. God is watching over His Word spoken so long ago over the land.  Its words spoke truth and life yielding its fruit and nurturing spiritual seed in all attending. Truly, for some, the Valley of Baca, and difficulties of the past lifted and their spiritual seed was uncovered. Throughout the testimonies and discussions, there was a definite sense of new strength rising.  Actually, the last night of worship was an amazing display of the family of God dancing mightily before the Lord, just as David danced bringing the arc into Jerusalem, 2 Samuel 6:14.  Even a two year old girl pulled her mother down from the worship team to dance!
As new relationships formed, established ones were inspired, the family of watchmen grew.  The power of the core values became a witness to all in action, rather than words taught, as the healing of the nations unfolded before our eyes.
Through a culture of honor, the Jesus Haus mission became a reality. Thanks to the many who see the vision and are sowing into this rebirth of a revival expression.  On its heels, new watches are now birthing into the nations and established ones are reignited with purpose and resolve.
Spiritual birth, one of the common themes, happened in ways we have not yet fully apprehended.  The God of breakthrough is at work.  We have reports of breakthrough continuing to occur for those attending as God prospers His purpose in ways we have yet to see.  ​
VISION:  This sense of spiritual birth was marked by a vision Sue Rowe had while in worship Wednesday evening.  The vision was of the throne room with the Lord seated on the throne.  Bright light engulfed it and only the form of the throne and a sense of a figure could be seen.  Suddenly, a red carpet was released and rolled down the stairs leading up to the throne.  It rolled out with a sense of great weight out onto the throne room floor.  As the last few feet of it unfolded, it unveiled a baby wrapped in the flags of the nations.  I heard the words, "Who will feed the baby?"  Speaking the vision and words into the room, there was a palpable sense of anointing that was released.
New birth was an underlying theme throughout the summit. 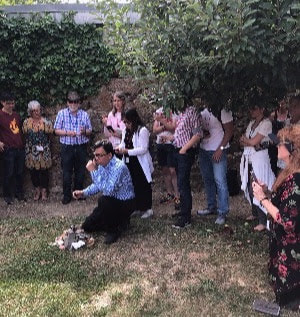 A NEW SPRING, August 13, 2019!
Psalm 84 also speaks of altars, v.3.  Participants placed an altar at Jesus Haus, Tuesday, 6
August, as an act of commitment to Him and rededication of the land.  Biblically, Noah built an altar as one of the first acts recorded after landing the arc. It pleased the Lord.  God spoke saying, “I will never again curse the ground for man’s sake,” Gen 8:21.  In Herrnhut, seven days later, confirmation and a supernatural praise expression burst forth in the land  when a new spring was found on the anniversary date of the revival, 13 August 2019. Confirmed by residents and park ranger, the spring had not been detected before.  It is notable not only for the date, but that it came forth seven days after the altar was placed.  See Genesis 7:10, 8:10; 8:12.

MESSAGE OF THE SUMMIT:
The message of Herrnhut this year is clearly, “Be strong and of good courage!” Josh 1:9. Cutting edge prophetic vision is giving way to apostolic birthing.  Connections and relationships are being effective and intentional in building vision.  This is not an hour to shrink back, but to press in.  God is releasing strategy to birth forth the vision and mission He has given you.  It is an hour when watchmen are being called to rise above the political and religious strongholds, look for the Kingdom answers, and work together.  When apprehended, the walls that separate us are demolished and the love of the Father blows through the atmosphere.  The question now is, "Behold, I will do a new thing, now it shall spring forth; Shall you not know it?" Isaiah 43:19.   May your seed erupt in joy and bring forth the fruit for which it is purposed. The fresh spring waters are gushing forth to release the creativity of God and the fruit for which His word was sent.
Numbers 21:16-18
From there they went to Beer, which is the well where the Lord said to Moses,
“Gather the people together, and I will give them water.” Then Israel sang this song:
“Spring up, O well!
All of you sing to it--
The well the leaders sank,
Dug by the nation's nobles,
By the lawgiver, with their staves.”
The word “sank” in that passage literally means “to dig, search for”
We have been digging and searching for the well of the Spirit in Herrnhut.  The fact that a NEW well was found, and not the old one is truly a prophetic sign and a gift from the Lord:
Proverbs 25:2
It is the glory of God to conceal a matter,
But the glory of kings is to search out a matter.

Psalm 84:5-7
"Blessed is the man whose strength is in You, whose heart is set on pilgrimage.
As they pass through the Valley of Baca, they make it a spring; the rain also cover it with pools.
They go from strength to strength;
Each one appears before God in Zion."  Ps 84:5-7
Hallelujah!  We say, “Spring up, O well, in Herrnhut, and may the living waters of refreshing wash over the nations as they pass through your gates, only to return to their lands empowered to advance the Kingdom!” 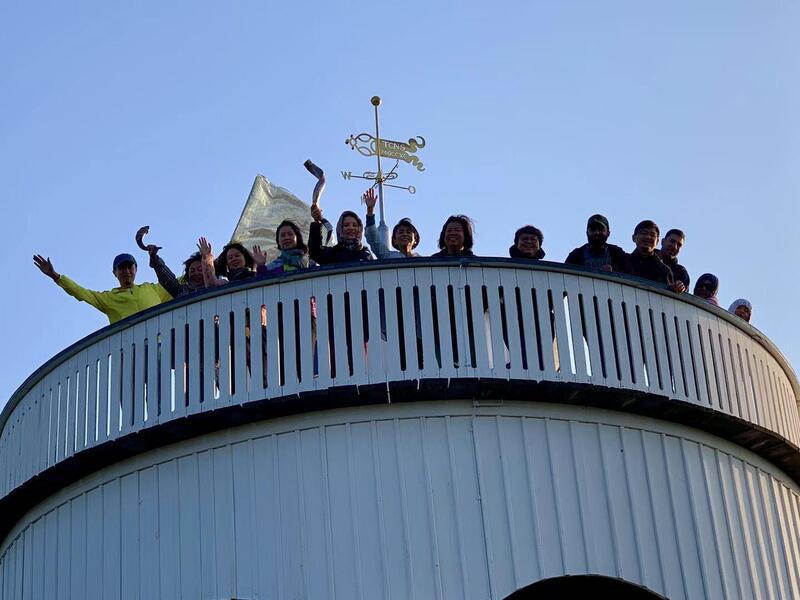 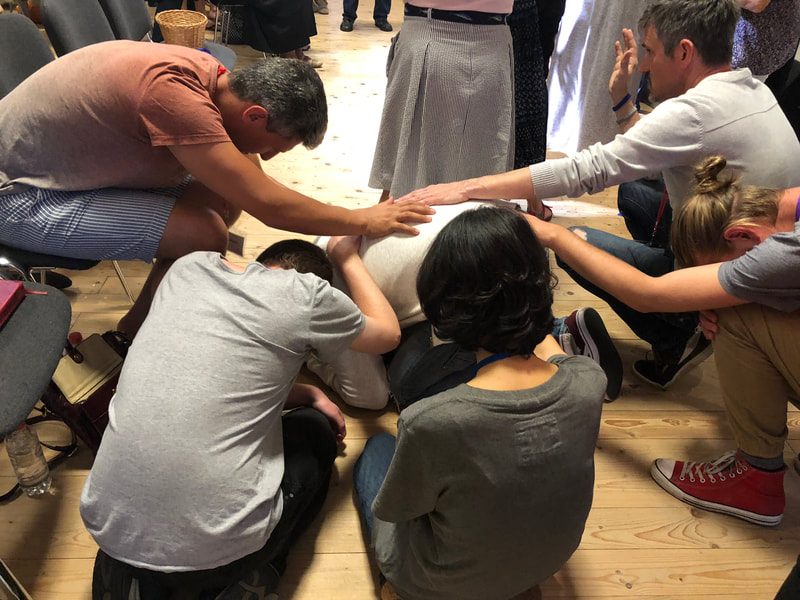